A tidal wave of patriotism… and U.S. flag sticker sales started after September 11th, 2001. It was impossible to avoid the flood, almost everyone had a flag sticker on their car and you couldn’t go anywhere without seeing the American flag. Gill Studios, one large manufacturer of flag stickers and decals, produced over 31 million flag stickers within a 3 month period in 2001. But the lifespan of a screen printed, vinyl flag sticker is typically 3-5 years so many of those flag decals are now long gone.

Flag sticker wholesale orders have steadily declined every year since 2005. Some folks have temporarily taken down their flags during recent questions of racial justice and the political climate. This happened as people re-evaluated what the flag represents to them. During this uncertain time, it seemed to some that the flag was being weaponized and became a symbol of conservatism rather than it’s true representation. It seems sad that what should be a positive symbol, temporarily took on a negative connotation for some. Shall we re-claim it for its true meaning? Shouldn’t we, as Americans, be proud to display this symbol? Our Flag stickers are a fantastic way to do this regardless of race or political persuasion. It can bring unity back to the country as we work through deep national division. Flag Stickers=Unity!

There is historically a yearly spike in sales before Flag Day and July 4th — and the beginning of the Iraq War in 2003 boosted sales, but the yearly trend in production and sales has been steadily downward. We want to do what we can to change that. Waving, or displaying the flag and supporting our country shouldn’t be just for holidays or the start of a war. Let’s celebrate our nation everyday! The U.S. Flag represents the union of the original 13 colonies(stripes) and the 50 States of the union(stars). The colors represent Red: hardiness and valor; White: purity and innocence; Blue: vigilance, perseverance and justice.

Flag stickers are a great, inexpensive giveaway item for any business or used as a fundraising product for many organizations. Flag decals are not only great on cars but also on helmets, hard hats, equipment, products, toolboxes… anywhere.  As a distributor of American flag decals as well as custom stickers, labels and magnets, Websticker wants to get the flag back on your bumper! 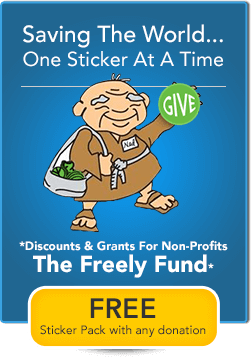