I just started reading (and attempting to digest the thousands of images) in a new book called Stickers, From Punk Rock To Contemporary Art.  There is an introduction by Shepard Fairey which I found of interest. Most of it is based on an essay you can read here. Any one with an interest in the history of stickers, stickers as art, street art or Shepard Fairey will find this of interest. I will get into more thoughts on the “Stickers” book by DB Burkeman in a later post, but for now, I’ll just point out some highlights from the Shepard Fairey intro/article/essay. 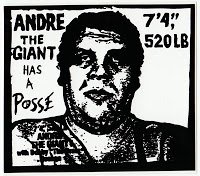 As a child Fairey “wanted stickers as badges of my culture” but later wanted to create his own stickers and… “ponder the sticker as a means of expression and communication for an individual, instead of just representing a band, company, or movement”. The ‘Andre the Giant has a posse’ stickers started the ball rolling for Fairey in Providence, RI. and “once the first domino fell, I was addicted and had my sights set on world domination with stickers” said Fairey. He hand screen printed and cut over a million stickers between 1989 and ’96 before he started using a professional printer.

Here are a few key quotes from Shepard Fairey on stickers relevant to sticker marketing:

“Repetition works, and stickers are a perfect medium to demonstrate the principle.”

“People… seem unable to resist the urge to stick them on their belongings, car, stereo, skateboard, guitar, and the list goes on… they manage to make their way into every nook and cranny on the planet”

“stickers are the most effective promotional tool possible for the price”

The once separate worlds of ‘stickers for promotion’ and ‘stickers for expression and art’ are merging more than ever. This is not only the result of changing demographics and marketing techniques but also print technology. It is more affordable then ever to print stickers – even low quantities, full color and for long term outdoor use.

Have an idea (or need ideas) for stickers to help with your own “world domination” of an idea, a band, a company, a cause, or just a thought provoking piece of art?  Websticker can help.